‘Stay in the soul’: Dallas treatment program is a lifeline for men with substance abuse issues

The Soul’s Harbor shelter helps residents get on the right path. 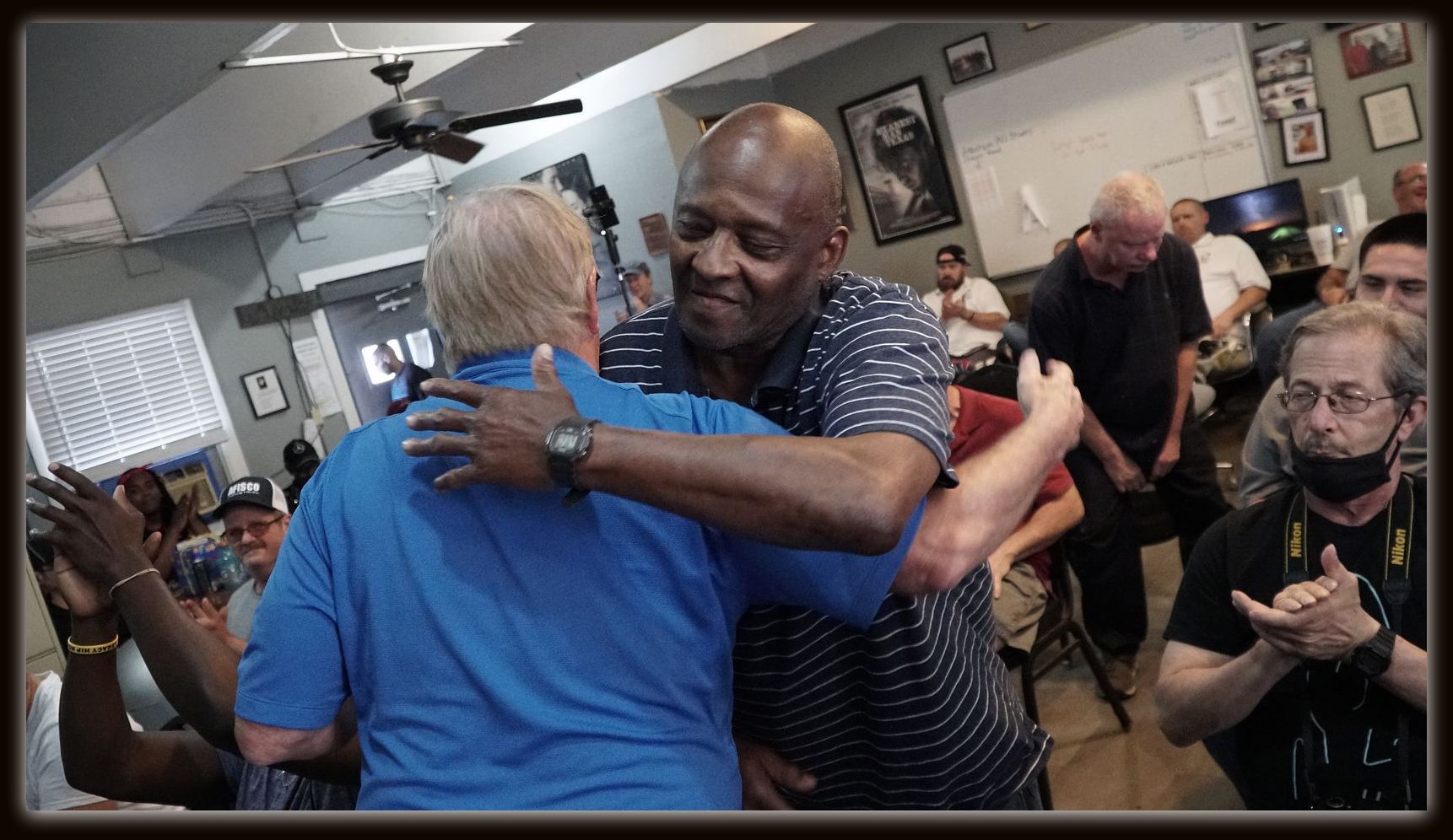 The spiked gold collar around therapy dog Pepper’s neck is the shiniest thing in sight in the meeting hall at Soul’s Harbor on a muggy Wednesday night in May. The shelter for homeless men with substance abuse issues shows its age, but that matters not a whit to the 60-odd men seated on a hodgepodge of chairs in the concrete building.

“I love this place,” says Kyle Swatt, a 33-year-old military veteran and current resident of Soul’s Harbor who’s working to kick a longtime meth addiction. “I found my brothers here.”…

Diverse in age and race, the group is assembled for a monthly Birthday Night, which will celebrate three residents whose birthdays fall in May as well as 18 men who are marking sobriety anniversaries of one month to 14 years.

Executive director Brent Burmaster, who marked 14 years of recovery from alcoholism in June, stands behind a vintage wood lectern exuberantly dispensing gold-plated sobriety coins along with personal praise for each recipient.

Residents pray after a meeting at Soul’s Harbor in Dallas.(Lawrence Jenkins / Special Contributor)

Many of the residents have cycled in and out of rehabilitation programs. Most have been in jail — some prison — so Burmaster developed Soul’s Harbor’s six-month residency program using a holistic approach along with principles from his 25-year career as an IBM sales executive. “In addition to being sober, we want to get them on the right path,” he says.

Most of the residents have children, and a Nurturing Fathers Program is set to start in September.

Birthday Night starts with a special meal catered by Panda Express and a slice of sheet cake. But as the men roar their approval of each and every achievement in controlling addiction, it’s clear that they are here for camaraderie, mutual support and, perhaps most important, hope. 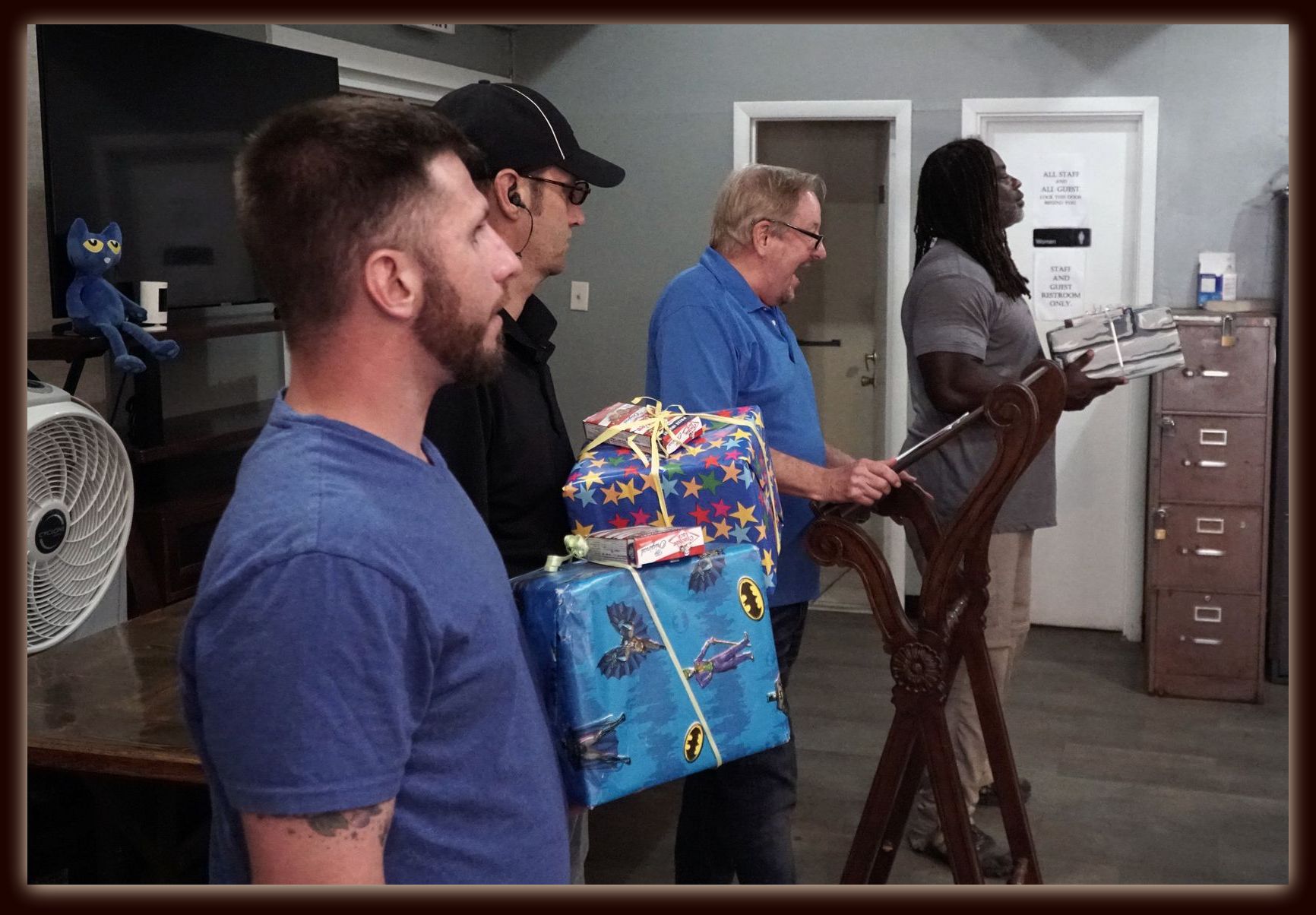 Residents with May birthdays get gifts during a celebration at Soul’s Harbor.(Lawrence Jenkins / Special Contributor)

“When you learn to celebrate each other, your life is gonna change,” says Jackson, who has been sober for seven years. “When I came to Soul’s Harbor, I didn’t know if I was gonna stay. I just didn’t want to go back to what drove me here.”

Jackson had been paroled in 2012 following a robbery conviction and entered a recovery ministry, but two years later, he was back on crack cocaine.

At Soul’s Harbor, he “gave himself permission to live his life differently” and stayed long enough to form relationships with men who had been practicing sobriety longer.

“I just want you to know, bro, it’s doable,” Jackson tells them. 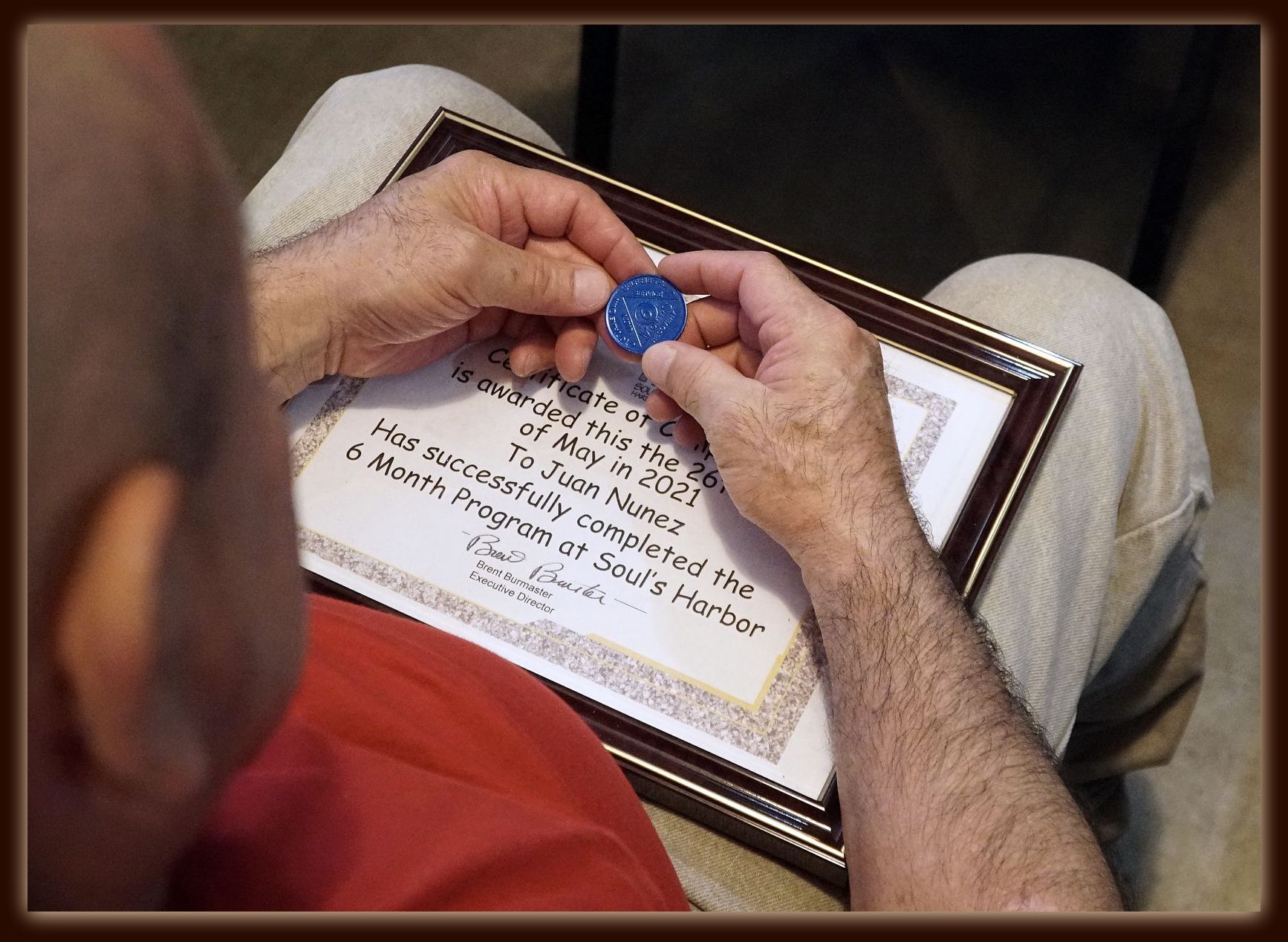 ‘Do the right thing’

Next up is Tanner “Bullet” Hole, who was paroled in February after serving 18 years for harboring a runaway child and aggravated assault of a public servant. He has been sober for 14 years and is staying at Soul’s Harbor as he transitions back to society.

“One month, two months, those are the hardest times when it’s going to be eating at you the hardest,” he tells the group. “But I saw more drugs in prison than I ever saw in the free world.”

Hole encourages them to “stay in the soul,” exercise and talk to each other.

“I just want to encourage you to do the right thing,” he concludes.

After the program, resident Steven “Link” Branum says such testimony “is motivating, especially for the guys with long sobriety.”

Burmaster started Birthday Night only a few weeks after he joined the nonprofit in 2009, when one of the residents mentioned it had been years since he’d had birthday cake.

“Birthday Night is our happiest night of the month,” Burmaster says. “It’s amazing to watch these guys like Kevin, who was sleeping on Martin Luther King [Jr.] Boulevard and turned his life around.”

“Brent is interested in, ‘How do you fix these problems,’” says restaurateur Eddie Deen, who gives a biannual workshop at the shelter about abandoning old thinking patterns and self-destructive behavior.

While Soul’s Harbor clearly has a spiritual element, and Burmaster and others often praise God, the program is not based on religion. 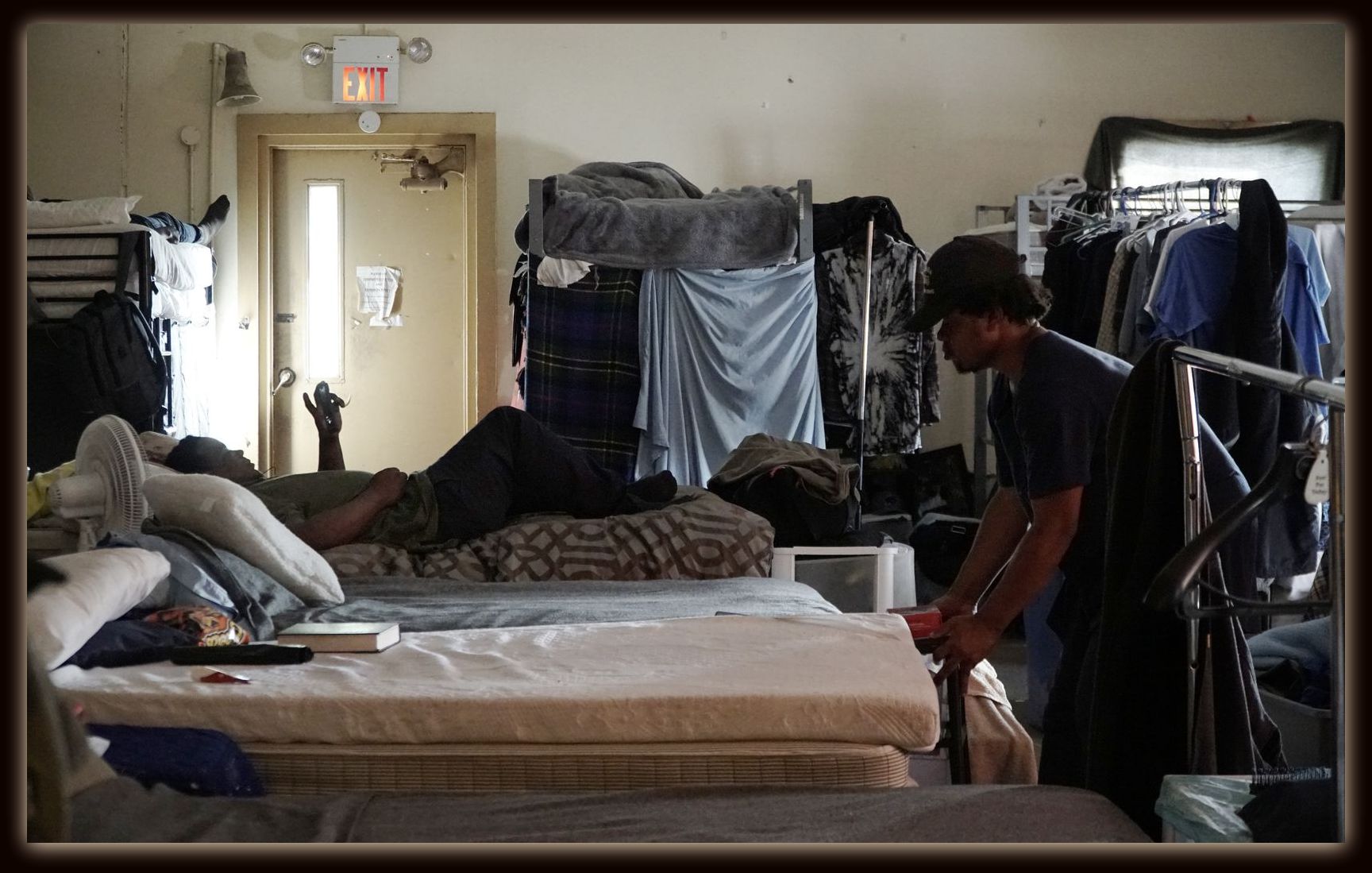 Men relax in their dorm at Soul’s Harbor in Dallas.(Lawrence Jenkins / Special Contributor)

Part of the process

About a third of the men will stay the full six months, and 80% to 90% of them will maintain long-term sobriety, Burmaster says. Others come back to try again.

“Some of them leave after two or three months,” he says. “They think, ‘I’ve got this.’ They go back to their druggie friends or drinking buddies and get sucked back into the same thing. … It used to make me sad, but now I recognize it’s part of the recovery process.”

After the meeting, Roland Scott and Larry Starnes both say they’ve been to rehab facilities, and, “There is no other place like this.”

“You can feel the love and the spirituality here,” Starnes adds.

Soul’s Harbor’s assistant director is Reginald “Reggie” Finch, himself a graduate of the program.

Finch gives credit to Burmaster, noting that he bailed him out of jail for vehicular theft and got him into Soul’s Harbor, even trusting him with credit cards on a trip with two other residents to pick up furniture in the French Quarter of New Orleans.

“Some nut like me,” Burmaster says quickly, with a grin.

“He’s the father; I’m the mother,” Finch says. “This is just a big school. We’re all Lt. Dan trying to become Forrest Gump.”

It’s an apt metaphor: In the film Forrest Gump, Lt. Dan was the angry alcoholic veteran amputee who became partners with the amiable Gump in Bubba Gump Shrimp Co.

Addiction is a lonely disease. Family and friends want no part of it and the drug addict and alcoholic isolate themselves – feeling remorse, guilt, and hopelessness. The addict and alcoholic are in a downward spiral that can lead the men to lose everything and become homeless. Soul’s Harbor opens its door to all homeless men with substance abuse issues into a very caring, inclusive and loving community. We have a common bond in our brokenness. We demonstrate to our men that they can have fun in recovery – whether at a Texas Rangers game, pool tournament, basketball pickup game, talent show or a night at the movie theater. Soul’s Harbor has been providing a caring community for homeless men since 1956.

So why is Soul’s Harbor so effective at keeping men sober? The answer is – the longer you stay sober, the better the chance you will stay sober. Sounds fairly intuitive. However, many programs are 1 or 2 months long which barely gets the addict or alcoholic off their drug of choice. Soul’s Harbor program is 6 months long followed by its aftercare program called the “Exit Plan Strategy”. Our Exit Plan Strategy is another 9 to 12 months. Residents that complete both our 6-month program and Exit Plan strategy has a very high success rate of long term sobriety.

Our Recovery Program at Soul’s Harbor is modeled after expensive treatment centers. We take “best practices” from these treatment centers and offer them at “no charge” for our community of homeless men. We treat the recovery program as a “school in recovery”. Our men are enrolled in cognitive courses, relapse courses, relationship courses, and other approaches to recovery. We offer Alcoholics Anonymous, Narcotics Anonymous, Cocaine Anonymous, Celebrate Recovery, and optional Bible Studies. To learn more about our holistic approach to recovery, go to The Harbor Program.

Below is a 13-minute video testimonial from one of our residents who successfully completed our 6-month recovery program. Reggie is our Assistant Director and is still working his program by being free of drugs and alcohol since April 2010.